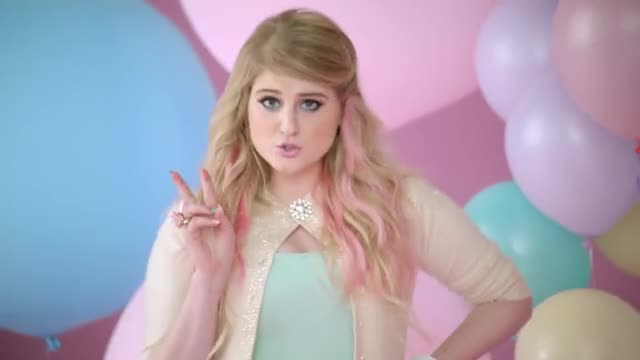 The other day I was driving home and a song came on the radio that actually made me pull over so that I could concentrate on the lyrics—you’re welcome, fellow drivers. The last time this happened I had heard Robin Thicke’s “Blurred Lines” for the first time, and I felt the need to pull over because, surely, I thought, I must have heard the words wrong. Nope, I heard right. This time I stopped with intrigue at Meghan Trainor’s body-positive anthem “All About that Bass,” and its paradoxical message—both radical in terms of its body politics and troubling in the way that it participates in what Adrienne Rich calls “compulsory heterosexuality,” or the concept the heterosexuality is a political institution, propelled by representations in media, literature, law, art, religion, and other social discourses, that naturalizes male dominance, oppressive gender roles, and homophobic ideologies, among other things.

The song is cute and catchy—I especially enjoy the old school doo-wop beat with the present-day idioms. The video follows that old school/new school faux-nostalgic tone too. Here’s what I mean:

And the song is smart in many ways. I think it’s clever how the lyrics compare musical notes to body types, in an effort to send the message, “hey, we’re all a part of this same symphony, y’all!” Trainor’s song completely has me with verses like this one:

“I see the magazine workin’ that Photoshop
We know that shit ain’t real
C’mon now, make it stop
If you got beauty, beauty, just raise ’em up
‘Cause every inch of you is perfect
From the bottom to the top.”

I appreciate this whole everybody-is-beautiful campaign in pop music lately–for me, it acts as an antidote to those horrible moments when my Facebook feed makes me fear the state of the world. Trainor joins other female artists in pop music world such as Colbie Caillat, Sara Bareilles, and Katy Perry, who have released songs over the past few years that call attention to the social construction of different “conditions of being” that we tend to associate with the idealized female body—beauty, properness, and gentleness. Other artists feature similar messages—Pharrell’s “Happy” views like a 24-hour love letter to unadulterated self-expression, for instance—but Trainor, Caillat, Bareilles, and Perry, among others, deal explicitly with gender construction. So right on.

Rich reminds us that gender and sexuality intersect in ways that regulate our sexual expression into an explicitly hetero-centric framework, and then labels that framework “natural” or “normal,” and in ways that we don’t immediately notice (because it’s “compulsory,” or coercive, not necessarily chosen). I hear Rich’s theory ringing like a warning when Trainor sings

“Yeah my mama she told me don’t worry about your size
She says, “Boys like a little more booty to hold at night.”

Is there a mainstream song out there yet that celebrates self-acceptance without tying self-acceptance to sexual validation (“Yeah, it’s pretty clear, I ain’t no size two / But I can shake it, shake it / Like I’m supposed to do”) or to the “skinny bitch” backlash (“I’m bringing booty back / Go ahead and tell them skinny bitches that”) or to compulsory heterosexuality with a predator-prey dynamic (“‘Cause I got that boom boom that all the boys chase / And all the right junk in all the right places”)? “All About that Bass” was almost that song for me…

4 thoughts on “What’s Sex Got to do with…Bass?”