If roles were reversed…

In their new single, “Girl in a Country Song,” Maddie and Tae comically criticize the current phenomenon sweeping the nation known as “Bro Country,” by portraying a gender role-reversal.

Quoting songs from various country artists including Luke Bryan, Thomas Rhett, Florida Georgia Line, Jason Aldean, and Tyler Farr,  they illuminate the perception of women in this male-dominated field. They ironically use lines and visuals which typically marginalize and objectify women, to demonstrate how misogyny radiates from country hits.
This mocking single demands that women be respected, because

Apparently country artists like “Conway and George Strait / never did it this way,” and “back in the old days” men treated women better. Unfortunately, by deferring to these influential men and the way that they treated women, they are giving Conway and George the power to determine and exemplify how all ladies should be treated.

Male-dominated country music teaches young girls how they should be treated? What?

They are unwittingly playing into male-dominance cultural complacency, even as they are feverishly fighting against the current status quo. Catharine MacKinnon, who insists that heterosexuality, a common thread in all of the aforementioned music, is a power dynamic, would say that Maddie and Tae are fulfilling the status quo by giving men the power to define what sexuality is and how it should be expressed.

They are acquiescing that men should be dominant over women in relationships. 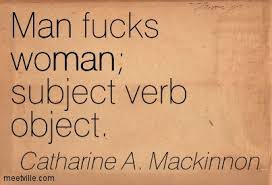 MacKinnon believes that women learn their role within the boundaries of hetero-sex to be passive, compliant, accommodating. By stating that any man, even influential country artists, should have the power to determine what the interaction between men and women should look like, they are defeating their own purpose. George Strait, my favorite country artist of all time frequently sings respectfully about women, but stereotypical heterosexual gender-roles are a glaring consistency.

In this song, he implies that women should love and be loved by their husbands by waiting at home for his return (passively) as the husband goes out and does whatever it is he’s doing (acting on his own dominance and agency). Even in his most recent song, the man approaches the woman who passively acquiesces to get in the car, have sex with, and become impregnated by this man who was a stranger. This song does nothing to disguise male dominance within heterosexual relationships.

How can women ever be the dominant voices for change when, even the most obvious attempts continue to solicit male judgment for setting the standards?

One thought on “What’s Sex Got to do with… Bro Country?”