What’s Sex Got To Do With…Proposals? 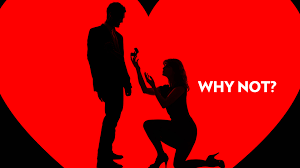 We are taught, as females, from a very young age to look forward to the day a man comes and sweeps us off our feet.  We are supposed to look forward to our prince charming and daydream of our wedding until the moment we say “I do”.  We watch Disney movies as children and lifetime dramas as adolescents, in which we learn the ways in which romance is supposed to look.  The man chases the women and when it is time, he will ask for her hand in marriage in a lavish fashion.  These images that are seen abundantly in the media, function as a way to socialize us and teach what has been deemed “appropriate” gender roles. We then internalize these messages and subconsciously play them out in our daily lives with no thought as to why, as if they are normal or natural.

The phenomenon of proposing is a great example of the manifestation of the social norms society has been teaching for centuries.  In the act of proposing, both men and women are taught their gender role.  Gender Roles are the ways in which each sex is supposed to perform their social selves as a male or female along with the specific roles they are to play as that sex.  Roles that are taught solely through the act of proposing are Male Dominance, Female Passivity, and Hetero-normativity. The first two terms reinforce the idea that the male is in charge and the female is at the whim of the male desire, while the third promotes heterosexual behavior as the norm. What’s important to note however, is we are also socialized to believe that these roles rarely if ever intersect and do not interchange. Is this why then, we rarely, if ever, see women proposing to men?

In the act of proposing, the man kneels in front of the women and asks for her hand in marriage.  In a very surface level analysis of this action, it would seem as if the women held all the power.  As if the man is submitting to her and all the power she holds in saying yes or no.  However, when looking deeper, one recognizes that the man holds all the power and always has.  In sticking to these strict gender roles that society says we must obey, yes, the woman may hint at marriage, but the man ultimately holds all the power to decide where the relationship will lead.  If a woman wants to get married, all she can do is sit and wait for her prince charming to exert his dominance by proposing to her; or run the risk of being labeled “weird” or “un-normal” for proposing herself.  In an article written by CBS News, they cite a poll in which three-fourths of Americans say it would be fine for the woman to do the proposing, in theory, however only 5% of those currently married say the woman proposed.  As the country begins to become more progressive, why is it we are still the most stagnant in gender roles when it comes to relationships and marriage?  Are we scared to break the gender norm, and have we become complacent with the cultural norm of male dominance in relationships?