Sexual assault on college campuses has been a huge topic of discussion in the media lately. As the reports of rape and assault on campuses increase, everyone is frantic to find a solution. Various groups have tried to combat the issues of inequality which inevitably lead to these heinous crimes. However, some believe that crimes like sexual assault, stalking, and other forms of power based personal violence are natural and uncontrollable.  This reinforces rape culture.

R.W. Connell argues that people believe sexual violence is just part of being a “real” man in Western Society. She suggests that society views men as uncontrollably aggressive and sexual and therefore, accepts that rape and sexual violence perpetrated by men is just a natural consequence of their existence (Barber, 47). Basically, society is trained to accept sexual violence as “normal” because men are “naturally” aggressive and just cannot control themselves. Sociologists believe that many men use violence to obtain power over others as an expression of their dominance in the social world. This sentiment has been echoed, albeit not as directly, many times since Connell made that argument.

Even as our society continues to try to reduce inequalities, messages which glorify dangerous sentiments permeate the media and serve to normalize very dangerous and unhealthy behaviors. In Maroon 5’s new song and music video, Animals, they glorify and romanticize the risky behavior of stalking. Adam Levine, the lead singer of the band and the main character in the video, holds the title of “sexiest man alive” from People Magazine. In the video, he is a butcher who stalks a young woman, covers himself in blood, breaks and enters into her home to watch her while she sleeps, and is rewarded, not punished. He faces no negative consequences for his actions and, using his celebrity status, reinforces the very backward idea that men are uncontrollably aggressive and that women should be flattered, not offended, by their unwanted advances and sexual violence. 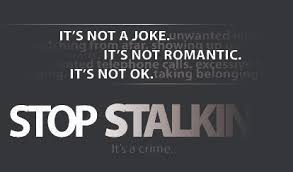 I was surprised that more people were not outraged by this video (although here is a very interesting parody of the video). What do you think about it? Do you think it is an acceptable video, one that just fits into our society’s current status quo, or is there something wrong with this portrayal? Is it wrong for individuals with that much power and sway to portray themselves as violent stalkers who are not punished or is it just freedom of speech and expression?